Five members of 01229-Ringing Group attended the Annual Ringers' Conference (Swanwick, Derbys) which this year celebrated the Centenary of the British Ringing Scheme. With five present representing a quorum, the opportunity was taken to hold the Annual General Meeting of the Group, with Emily elected to take the Chair, when the principal business was the Toast to Absent Friends. 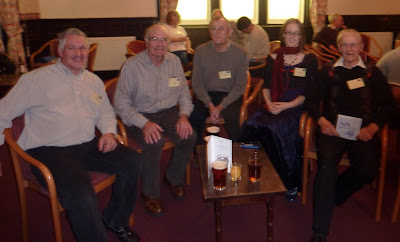 During the Conference, two reports of ringed birds affecting the group became available.

Long-tailed Tit BXC466, ringed at Leighton Moss, Lancashire on 6 October 2007, was controlled at Roudsea Woods and Mosses on 18 October 2009, almost exactly 2 years later, a distance of 17 km (this is the bird referred to in this post).

Maybe I should get you to do my PR then - there will be a vacancy soon!