The Peregrines in Cumbria have had a poor breeding season.  There were high hopes this year as most of the local birds had  a years rest from breeding the previous year. The average successful clutch was 1.66 and some birds did not attempt to breed for the second year. The photographs below were taken at a site where the birds had a second attempt.  Four eggs laid, two young raised with one infertile egg. The other, the chick died during chipping out. The eggs were sent to Lancaster University for storage and possible future analysis. ﻿﻿﻿
﻿﻿﻿﻿ 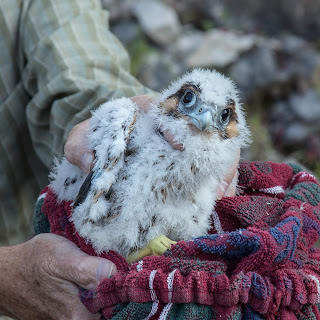