The "RAS Season" for our Marsh Tit study begins formally on 1st March. However, February is a the month for setting up feeding stations, catching and colour-ringing last-year's juveniles that were missed during the winter and generally "getting the feel of things". The last two days (2 nd and 3rd March) were spent in Roudesea Woods and Mosses, targeting Marsh Tits. In the 2009 season, survival of adults was well up to average; however recruitment of new birds into the population was very poor, suggesting a poor breeding season in 2008.

This winter, very good numbers of new Marsh Tits have been ringed, suggesting an excellent breeding season last year (2009). I ringed 10 this morning alone and 19 individuals were accounted for in the two days.

In these two days, 109 birds of 8 species were processed, of which 59 were new. The numbers are below (retraps in brackets: 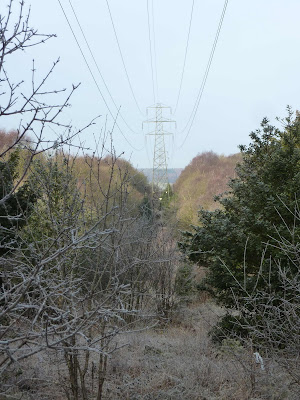 A clearing through the woods under the power cables is a good habitat for catching Marsh Tits
Posted by O1229 Ringing Group at 14:07

you should send this one in to the pylon appreciation society! Honest!